Hello friends! Today is my stop for the #SpellhackersinAsia tour hosted by the lovelyKate @ Your Tita Kate. Read on to find out my thoughts on this book!

Synopsis: From the author of The Disasters, this genre-bending YA fantasy heist story is perfect for fans of Marie Lu and Amie Kaufman. 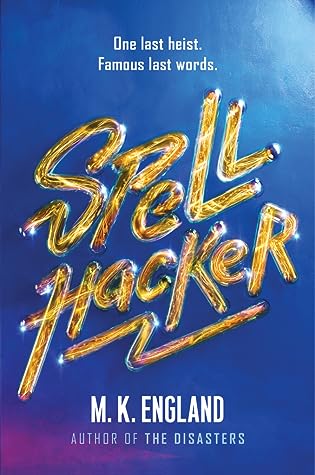 In Kyrkarta, magic—known as maz—was once a freely available natural resource. Then an earthquake released a magical plague, killing thousands and opening the door for a greedy corporation to make maz a commodity that’s tightly controlled—and, of course, outrageously expensive.

Which is why Diz and her three best friends run a highly lucrative, highly illegal maz siphoning gig on the side. Their next job is supposed to be their last heist ever.

But when their plan turns up a powerful new strain of maz that (literally) blows up in their faces, they’re driven to unravel a conspiracy at the very center of the spellplague—and possibly save the world.

Spellhacker was one of my most anticipated reads for the year. A heist story sounded super fun and the synopsis was too intriguing. So I was pretty excited to be selected for the blog tour. I really enjoyed the book though at the same time I wouldn’t say I was in love with it.

The story was about Diz, Remi, Ania and Jaesin. They run a maz (which is magic) siphoning job. They decided to go for one last heist before leaving this line of work so that they can all start their lives ahead. It was of course not that easy and through this they come across some deadly secrets which change everything they have known about their world and themselves.

The story was pretty intriguing. I loved the whole action element of the story where there was always something going on in the plot. This did make it a little too fast paced for my taste at times. Somewhere in the middle of the book, things were happening but at the same time it was slow (I really hope that it’s making sense). It got boring for me and I was almost ready to dnf but I trudged on and things were back on track soon. The scenes though action packed felt under whelming and it read like any other normal scene. You know how usually in a high stakes scene, you can feel the tension in the book but this book did not do that for me.

The story also focuses on the capitalist system and how greedy and selfish the big corporations can be. It talked about the power imbalance which exists and how these big corporations hide their huge wrong deeds by doing good deeds in the name of helping people. This narrative added a good depth to the story.

The characters in Spellhacker were different and fleshed out. Our main character, Diz definitely took some time getting used to though. She was wary about emotions and trusting people due to which she made hasty decisions. She was a flawed character. My favourite character was Remi. The other two characters, Ania and Jaesin are also well written and I really wish that we could have got to read their POVs as well. Reading only from Diz’s POV definitely got boring for me. The book also touched upon mental health and abandonment issues but I don’t know enough to comment on it that well.

The found family trope was well executed and was one of my favourite parts of the book. They always had each other’s backs and truly loved each other with all their flaws and issues. Their camaderie and trust in each other was heartwarming to read.

The World Building and Pacing

The world building was really unique and I loved the whole magic system. It was explained really well and the past and present timelines and history about the magic were so well-written and  easy to understand. It was intriguing and I loved reading about the parts where these things were talked about and explained. I was also really impressed by how well the details were touched upon. It was really fresh to read about all these technical stuff explained in a fun and easy manner and this was definitely my favourite part about the book. I am genuinely in awe of how well the world was laid out.

The pacing was fast and everything was happening one after the other not really giving the reader much time to ponder. But as I said above sometimes it got too fast for me and it felt like seeing a movie which was set at high speed. But other than this, it was alright and not that big an issue especially if you like fast paced action packed books.

This book had amazing queernormative representation. The main character is queer, one of the other main characters is non-binary, there is a bi secondary character, widowed lesbian bakery owner and elderly science husbands. There is also chronic illness rep which is really well done.

Overall, if you like fast paced queer fantasy with excellent world building then this book is definitely for you. If you have read The Disasters, you will probably like this book. The narrative and plot does take time getting used to so do keep that in mind when picking up the book!

Thank you to HarperTeen for an eARC via Edelweiss for the blog tour.

M. K. England is an author and YA librarian who grew up on the Space Coast of Florida and now calls rural Virginia home. When they’re not writing or librarianing, MK can be found drowning in fandom, rolling dice at the gaming table, digging in the garden, or feeding their video game addiction. They love Star Wars with a  desperate, heedless passion. It’s best if you never speak of Sherlock Holmes in their presence. You’ll regret it.

If you’re a reader outside the US, you can get a copy of this book and some awesome pre-order swag if you order the book till 27th January and submit your receipts. You will be eligible for this amazing pre order campaign by the author. You can find out more details HERE.

Have you read this book ? What are your thoughts on it ?

Are you planning to read it ?

Which is your favourite sci-fi novel which you read recently ? Tell me about it!!