Synopsis: People lived because she killed.
People died because he lived. 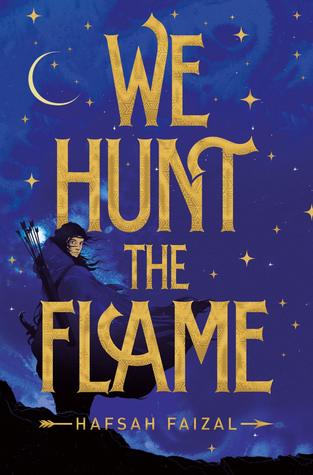 Zafira is the Hunter, disguising herself as a man when she braves the cursed forest of the Arz to feed her people. Nasir is the Prince of Death, assassinating those foolish enough to defy his autocratic father, the king. If Zafira was exposed as a girl, all of her achievements would be rejected; if Nasir displayed his compassion, his father would punish him in the most brutal of ways.

Both are legends in the kingdom of Arawiya—but neither wants to be.

War is brewing, and the Arz sweeps closer with each passing day, engulfing the land in shadow. When Zafira embarks on a quest to uncover a lost artifact that can restore magic to her suffering world and stop the Arz, Nasir is sent by the king on a similar mission: retrieve the artifact and kill the Hunter. But an ancient evil stirs as their journey unfolds—and the prize they seek may pose a threat greater than either can imagine.

Set in a richly detailed world inspired by ancient Arabia, We Hunt the Flame is a gripping debut of discovery, conquering fear, and taking identity into your own hands.

We Hunt the Flame was one of my most anticipated books of the year. It definitely had a lot of good things but also had some parts which I wasn’t a big fan of.

The Story and World Building

The story of the book followed Zafira, a huntress who pretended to be a man because of the misogynistic society she lived in. The second protagonist was Nasir, the broody assassin and also the crown prince of Arawiya.  They are both are sent on a quest individually to find a book which could bring back magic to the land and their paths cross that time and the story follows. The story was definitely interesting and it is filled with quite a few revelations and secrets. But I think it depended a lot on cliches which got tiring after a point. Personally, I think it could have been better but it did not completely disappoint and as such I have hopes from the sequel.

The world building was stunning. The desert setting of the book was really well done according to me and while reading you could actually imagine and feel it which made for a good reading experience. The descriptions of the settings and the food were super amazing. It all comes together really well.

Our two main characters are Zafira and Nasir. Zafira seemed like a very interesting character in the start of the book but I think her whole character development kind of dwindled in the middle of the book. Her actions and storyline seemed repetitive after a point.

Nasir was the assassin who had a bad childhood and was abused by his father. Nasir was a lot like a cliched bad boy character who hates everyone and is broody but slowly comes to be known as caring. He is a grey character bordering more on the bad side than the good. Personally though I felt his characterization wasn’t that great. Beyond a point, his arc also seemed repetitive and only got interesting in the last 25% or so.

The other characters were Altair, Kifah, Benyamin, The Silver Witch, Yasmine, Lana and the sultan. Altair was the fun albeit a little secretive sassy character who was the bane to Nasir’s existence (a lot like the grumpy and sunshine best friend combination). His parts though fun to read sometimes felt like trying too hard. But for me his arc was written well with a lot of mystery around him by the end.

Kifah and Benyamin’s story could’ve definitely been explored better and I couldn’t really connect to either of them much. The Silver witch was a good character but her storyline really confused me and I wasn’t completely okay with her. The sultan was another character who wasn’t explored much other than in the start of the book. Lana was Zafira’s younger sister and Yasmine was her sister at heart and I really liked their characters and I hope to see more of them in book two!

The Writing and Pacing

The writing style of this book was my favourite thing about it. The author weaves absolutely brilliant descriptions and it was a treat to read it. Her writing was really beautiful and borderline poetic. It really sets the mood of the whole book and helped me to move over some of the drawbacks. Hafsah Faizal also uses Arabic words and it all comes together so well and I really liked it a lot. There is also a glossary at the end with all the pronunciations and explanations which I really loved

The pacing was one of my biggest problems. It was slow paced and I thought after 50 pages that maybe now it will pick up momentum..but it never really happened until the last 50 pages and by then this pacing had worm me out. So even though exciting things took place, I couldn’t completely enjoy it. Since the pacing was slow, the focus was more on the characters. But the character arcs were also slow and as I mentioned before, they got repetitive. This bummed me the most about the book.

There were some plot points which I felt were unfinished. I had quite a few questions about the why and how of them. Short explanations were given for some but it did not satisfy me completely.

Zafira disguises as a hunter to hide her true identity as misogyny is deep rooted in her society. This seemed like a very interesting plot point in the start and it was talked about but then it just..fizzled out.It just wasn’t talked about much after the first 20% of the book.  I expected it to be more prominent in the storyline but it wasn’t and that kind of disappointed me probably because I got excited about that prospect of a topic so important being raised in the story.

I went into this book knowing it has slow burn romance. And my god was it slow burn. Zafira and Nasir’s tension was quite palpable and it did build up to a great extent. They hated each other at first due to preconceived notions but then of course started to feel more.  I wouldn’t say I was completely okay when it happened but it’s not something which affected me much.  (That is the problem when you compare every enemies to lovers slow burn romance to Kunal and Esha from The Tiger at Midnight.)

✨hello everyone💕 today I’m showcasing my fave books from one of my favourite authors🥰
>> I’ve been told endless lies since I was born. That I was not kind enough, considerate enough, humble enough, honourable enough, pretty enough, pleasing enough. And that if I failed to meet the needs of my those around me, I did not deserve to live. Propaganda. All of it. <<
💫hello 💕 have you got any bookmail recently ?🥰
hello 💕 showing one of my super favourite books of the year today🥰
💫hello everyone! Hope you’re doing good 💕
💫hello everyone! What are you reading nowadays?