Synopsis: Beyond the Empire and within it, the threat of war looms ever larger.
The Blood Shrike, Helene Aquilla, is assailed on all sides. Emperor Marcus, haunted by his past, grows increasingly unstable, while the Commandant capitalizes on his madness to bolster her own power. As Helene searches for a way to hold back the approaching darkness, her sister’s life and the lives of all those in the Empire hang in the balance. 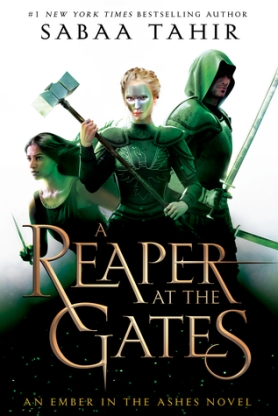 Far to the east, Laia of Serra knows the fate of the world lies not in the machinations of the Martial court, but in stopping the Nightbringer. But while hunting for a way to bring him down, Laia faces unexpected threats from those she hoped would aid her, and is drawn into a battle she never thought she’d have to fight.
And in the land between the living and the dead, Elias Veturius has given up his freedom to serve as Soul Catcher. But in doing so, he has vowed himself to an ancient power that will stop at nothing to ensure Elias’s devotion–even at the cost of his humanity. (Goodreads)

Review: After I finished reading A Torch Against the Night, I waited to read this book because I was not ready for it to end and wait that one year for the fourth book. But the suspense was killing me, so when I finally started reading this book, I started it on a high and happy note.

The Plot and Writing

The plot, twist and turns, suspense, romance and the whole story was just so wonderfully written and came together so beautifully that I have fallen even more in love with these series. The characters and their lives somehow get interwoven and the way Sabba Tahir has potrayed that is simply amazing.

There were many moments when I just went ‘NOOO’ at what was happening in the books and at times, had to keep it down just to take in what I just read. It’s a whirlwind of emotions. The writing is just as beautiful as the first two books and somehow it only gets better in this book.

The title of all three books always at some point in the book become relevant and that is one point which I really liked about it. The side characters are also so interesting with such great stories that it becomes an overall fun read. Elias, Laia and Helene all get more interesting and these are some of my favourite characters. They are so well written and nuanced and their growth and stories really makes this series so much better and intriguing.

So all I can say is that it’s going to be a long and exciting wait for the fourth book next year to see how it’s all coming together in the end. This book gave me some serious hangover. Read it now because this is definitely a book you need to read.

You can read the review for Ember in the Ashes (#1)and A Torch Against the Night( #2) as well.